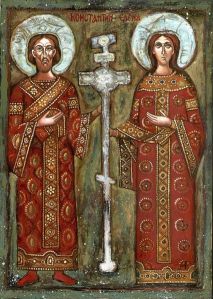 I do not really want to spend a lot of time talking about Constantine since the last few posts have dealt with him in some ways.  However, the importance of who Constantine is and what he did for the Church cannot be overlooked.  He did more than just end Christian persecution.  He also had a lot to do with defining Christian beliefs, not that he defined what Christians believed, but he did get bishops together to talk about what Christians believed.

Another aspect that changed for all Christians was the worship of the Church.  Before Constantine some churches had been built around the graves of martyrs or in out of the way places.  The worship service was simpler.  When Christians were allowed to express their faith they started to add things to their worship, such as incense, processionals, and choirs.  The bishops also started to dress up, wearing special garments for the service.  Some Christians might think of all these things as ruining the simplicity of the worship service before Constantine.  However, I would suggest that with the freedom to worship as they liked the Christians developed these things not to appease the Emperor but to express their own faith and devotion to God.  The bishops still had control in the church and even if they might want to express thanks and loyalty to the Emperor they did not have the change their services to do this.  Constantine might have seen himself as over the bishops in some respects but he did not feel this way when it came to the issue of theology.  Liturgy and worship experience is a huge expression of theology.  As we say in the Anglican Church, we are what we pray.

“Official Theology” was another development that started under Constantine.  This was really more of Constantine allowing Christians to develop Christian doctrines which they could all agree on.  So really Constantine made the Church catholic (universal).  Christians had the same desire to see all Christians united under the same beliefs.  For so long church leaders could only communicate through letters or visits with neighboring regions.  However, Constantine in order to better organize Christianity’s belief systems brought all bishops (or their representatives) together in one place to discuss what beliefs were crucial to the Christian faith.  We call this meeting the Council of Nicea, which met in 325.  The bishops came together to discuss jurisdiction and the bishop’s power, they discussed the dating of Easter, and several other smaller matters.  However, what was meant to be one small matter about the beliefs of a priest from Alexandria became a large focus of the meeting.  I will discuss Arius’ beliefs in a different post.  But for now we can say that they were heretical and so many were led astray by them, the Nicene Creed was written to combat this heresy.  The Nicene Creed as it is commonly known in most churches today is not the actual Nicene Creed.  What most churches recite today is the Nicene- Constantinopolitan Creed, which has its bas in the original Nicene Creed, but has some statements flushed out a bit more.

So the unity of the Church and a basic set of beliefs can be said to be the impact of Constantine on the Church.  He did not do a whole lot directly in the Church, but he allowed for drastic changes to be implemented by the bishops of the Church.

I am a graduate of Asbury Theological Seminary with a Masters of Arts in Theology focusing on Church History. I am a Third Order Benedictine monk, in the Company of Jesus. I am married to a wonderful woman, we just had a baby Michaela Rose. You can follow me and be alerted of new blog post by following me on Twitter @jtalexanderiv. Or following this blog.
View all posts by Jesse →
This entry was posted in Church History Tuesday and tagged Christianity, church, Constantine, development of Christianity, Early Church History, God, Jesus, Patristics, religion. Bookmark the permalink.