Monastic Monday: The Liturgy of the Hours 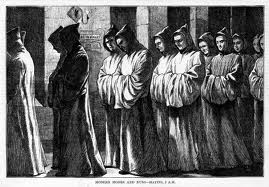 Cloistered monastics usually hold to the Liturgy of the Hours, seven prayer services practiced in a monastery.  The Hours were developed by St. Benedict of Nursia, who took the form from John Cassian’s writings, on the practices of the Desert Fathers (although Benedict did add an eight office, Prime).  The Hours revolve around the Psalms.  In some monasteries, the complete Psalter is read in the span of a week, following the Hours.

The breakdown of the Traditional Roman Hours are as follows:

The Hours can be divided into Major or Minor Hours; each holding to a different structure.  The Major Hours are larger and usually contain a longer reading from the Psalms and Scripture passages, it might contain a lesson (usually from a saint or martyr’s life or a theological treatise), and usually contains a second hymn.  The Minor Hours are usually shorter, containing either three short Psalms or three pieces of a longer Psalm and a very short passage of Scripture.  The Major hours are usually reserved for Lauds (or Prime), or morning prayer and Vespers or evening prayer, thus bookending the day in longer prayer services.

The Liturgy of Hours is important and was developed to wrap the monastic day in constant prayer.  The Benedictine principle of this is Ora et Labora (pray and work), the monks and nuns would spend time in prayer from Matins until Prime and then they would go to work around the monastery, between Prime and Terce, Terce and Sext, and Sext and None (with a space for lunch usually around Sext).  Then they would spend the rest of their time in prayer, reading Scripture, studying, or other spiritual matters.  It was important to break up the work of the monastery for the more important matter of prayer, this way the mind could not get too focused on work.  If the a monastic started to focus too much on work they could be called back to prayer by the ringing of the bells on the hour or by leaving their work to go to the chapel to pray at the appointed hours.  Thus, their mind would again become focused on God.

Question: Have you ever experienced the Liturgy of the Hours, in any form, Roman Catholic, Orthodox, Anglican or Lutheran, if so how did it affect your day?

I am a graduate of Asbury Theological Seminary with a Masters of Arts in Theology focusing on Church History. I am a Third Order Benedictine monk, in the Company of Jesus. I am married to a wonderful woman, we just had a baby Michaela Rose. You can follow me and be alerted of new blog post by following me on Twitter @jtalexanderiv. Or following this blog.
View all posts by Jesse →
This entry was posted in Monastic Monday, Uncategorized and tagged Divine Office, Liturgy of the Hours, Monastic Monday, Monks, Nuns, Prayer. Bookmark the permalink.