The Sloth of Disobedience

“The sloth of disobedience,” has been a phrase I have been kicking around in my head for the last few days.  It is from the first paragraph of the Rule of St. Benedict.  I have noticed that in my own life usually most of my sins and disobedience against God come from my own laziness.  I might not pray because I am either lazy or get distracted by something.  After this happens a few times it becomes very easy to just say it doesn’t matter any more.  It is easy to drift around, maybe being good one day, then the next day sinning a lot or living without God.  Laziness just makes the religious life sporadic at best. 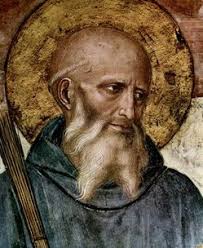 However, I have to also remember the first part of the sentence, “The labor of obedience will bring you back to him from whom you had drifted through the sloth of disobedience.”  So St. Benedict calls us back to God by “the labor of obedience.”  Having a set routine or schedule is one practice of obedience that can help combat (what the Desert Fathers called) the noon-day demon or laziness.  Fellowship also helps combat laziness.  This is why hermits are not to be people just starting out on the Christian journey or the monastic life.  Before trying to live the religious life alone one needs to have done his/her time in the ranks with others.  Think of it in military terms, as far as I know, no one starts out a spy or sniper.  They have to rise up through the ranks before they are qualified to be doing combat on their own.  So everyone should start out in a community and then if he/she is called by God, he/she might move out of community to worship God as a hermit.

I am trying to work on obedience in my own life and figure out how that is to work itself out in a religious culture that praise either the “me and Jesus” idea or the mega church model of get lost in the crowd.  The later, has taken the idea of community too far, to where no one really has to get to know anyone if they don’t want to.  The other forsakes community and “religion” in general saying all I need is my Bible and my personal relationship with Jesus.  While people can find God in both contexts, I believe that most people would like to live in the middle where we can be accountable and obedient to our spiritual leaders and find meaningful relationships within a community of believers.

So I am finding that being in community is a way to help me be obedient to not only my rule of life, but also to the two greatest commandments: Love God and Love your neighbor.

I am a graduate of Asbury Theological Seminary with a Masters of Arts in Theology focusing on Church History. I am a Third Order Benedictine monk, in the Company of Jesus. I am married to a wonderful woman, we just had a baby Michaela Rose. You can follow me and be alerted of new blog post by following me on Twitter @jtalexanderiv. Or following this blog.
View all posts by Jesse →
This entry was posted in Uncategorized and tagged church, religion, spirituality. Bookmark the permalink.